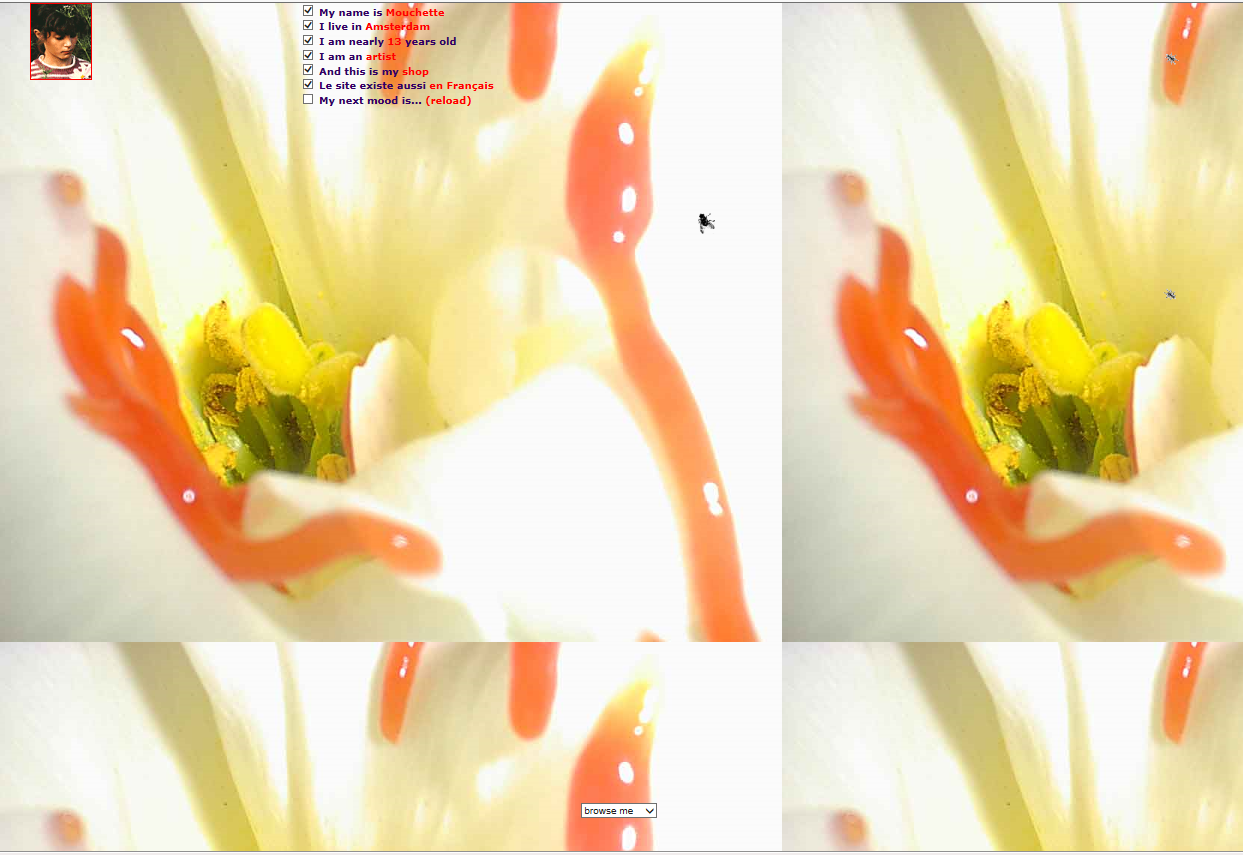 
l   Display in the internet

Mouchette’s website is supposed to be a thirteen year old girl. The first page just introduces hername, age and a list of relevant information. Next to the introduction has a portrait of a sadlooking adolescence girl. The background contains the combine pictures with a close-up a luridflower, its petals crawling with ants and files which created a sense of eerie. The background canbe changed if you pressed the button of “reload” which next to “My next mood is …..” The otherstrange thing is the weird sound like smiling and crying in different time. The drop-menu link candirect you into different theme of the story.

2.    Central themes of those sections

“Suicide Kit”
What is the best way to kill yourself when you're under
13? The strange question to  ask you to commit suicide. The
funniest thing is many people response and shown their answers
on the Internet. Some response would suggest ways to die like
taking pills. Some viewers would kindly to suggest cherishing the
valuable life. 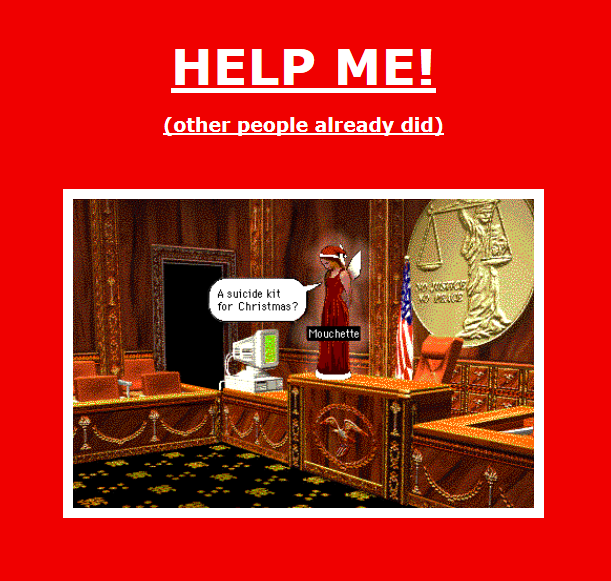 The child is depicted in a sexual way. The background image is of
a close-up a young girl’s face,sticking out her tongue. The text
accompanying this image reads: “Want to know what my tongue
tastes like? Try it on your screen and tell me. The site possesses
interactive questions for viewer to respond and ask for the e-mail
address. You access to the page: “Meet my dad” and “Meet my
Mum” to read the strange story. 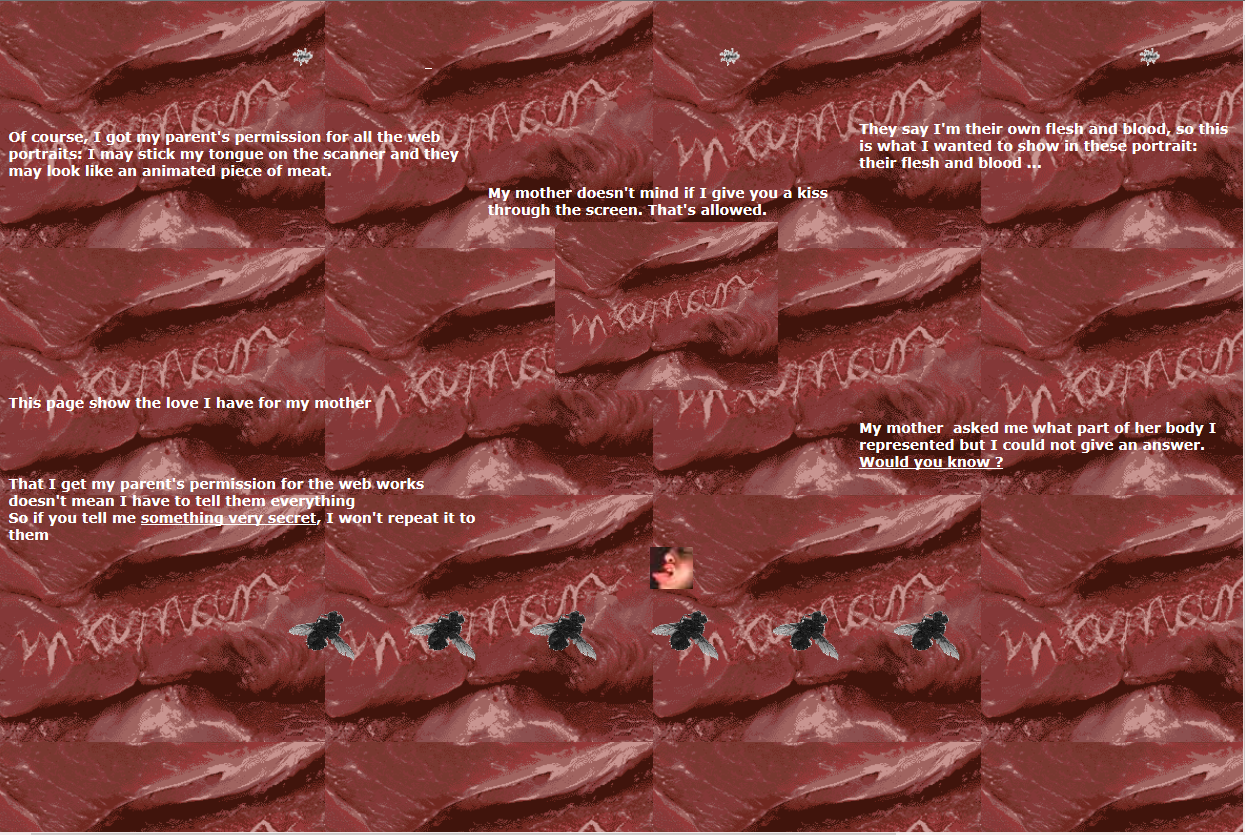 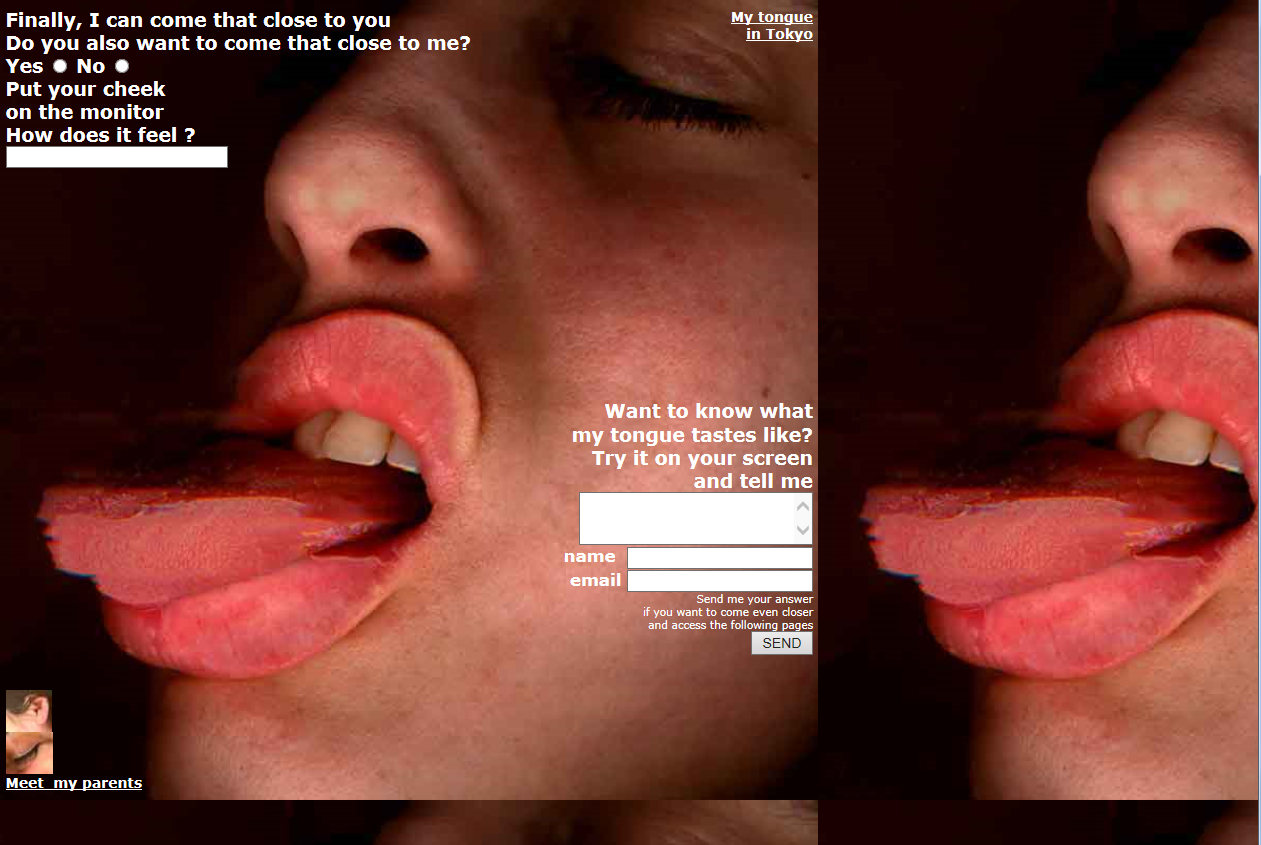 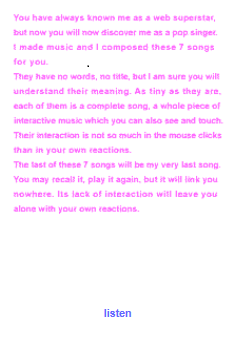 Simply read from the title, I expect the section is the sweet singing by the youth girl. The truth is entirely shocking. The 7 songs are about a woman gasping are activated. From the song, I just can imagine the scene of sexual intercourse between the couple. Why the child is so early to be sexualized?

This page appears when I click the right corner of the first page. I am shocked to see this scene. When you move the mouse, the picture will appear. The picture is small but you can guess what is
happening with a woman moaning. 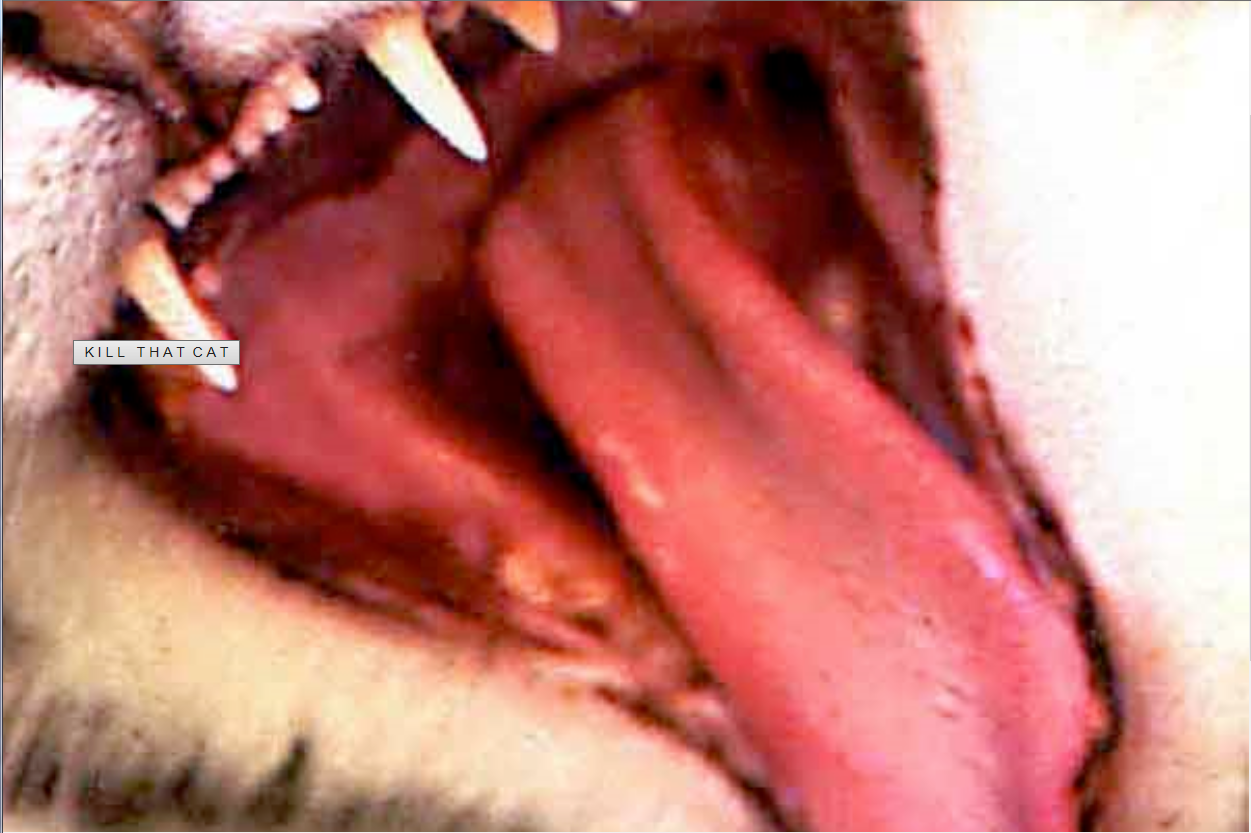 An image of a cat, open its mouth and showing it sharp teeth nervously which convey a sense of ambiguous. The cat was violently shaking on the screen while shrill screaming and are playing, the viewer is asked to kill this cat.

D)    Features that the artwork shares with the earlier art movement 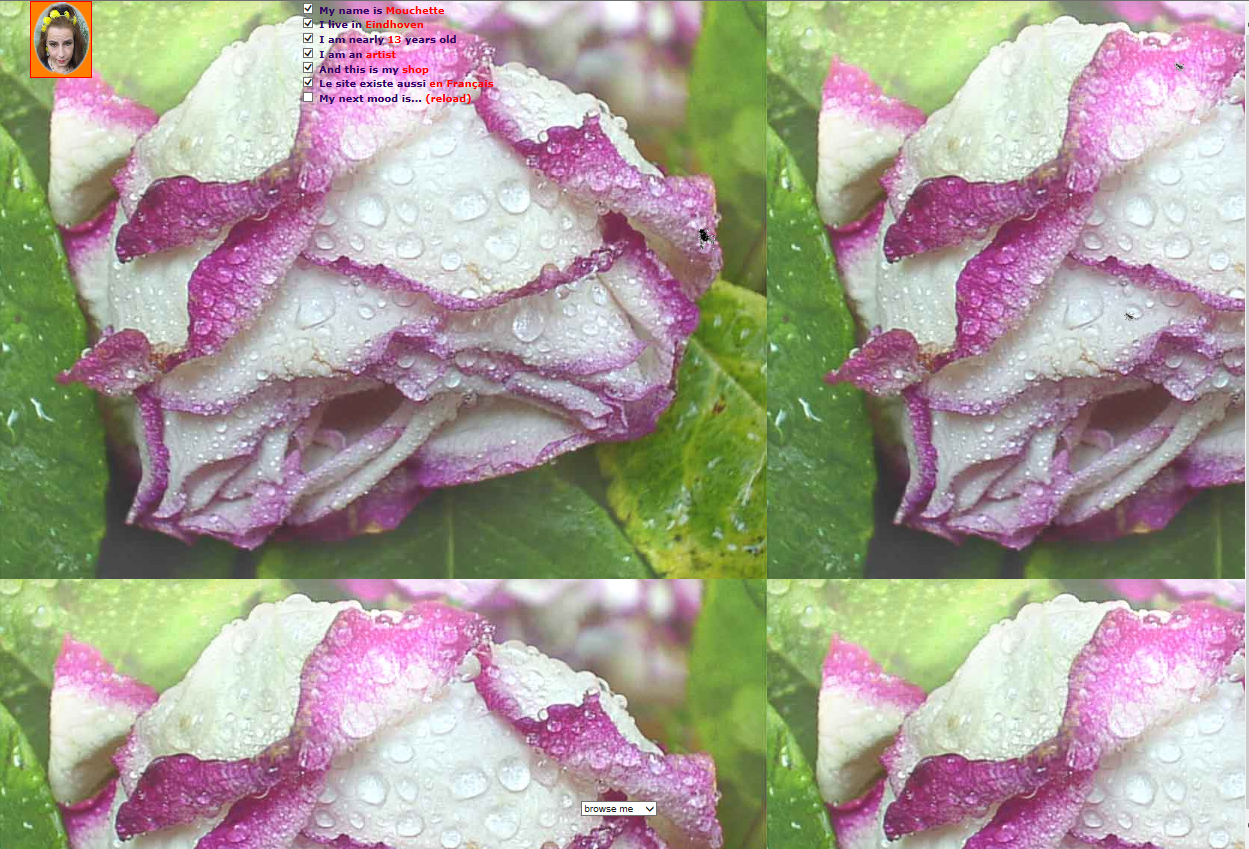 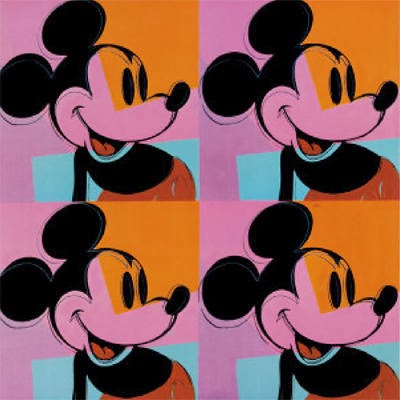 l   The event and audience participation
The audience can chose the different section of the web to read. In the website, there are multiple choices to answer the question.

l   The chance/ Random
There are some blind prints which have some special animations or pornography which pop-up unexpectedly.

l   Formal Instruction
There are drop-menu and multiple choice guides you to explore the mysterious website. For example, the “Painting”, you press the button the “Author unknown”, then you can read the development of the story telling form the story.

l   Borrowing or appropriation
It is not start from zero. The Mouchette persona and Web-site are loosely based on Robert Bresson’s 1967 Film, “Mouchette” about a suicidal adolescence girl who is raped in a forest at night. The portrait of a sad girl on the cover page matches with the background story of Mouchette.

According to the “Film Quiz”, there is a formal notice from Robert Bresson to “Mouchette” to cancel the film Quiz in 2002. According to Toni Saint, “this copyright issue the question of ownership over fictional identities……and raises issues of originality and ownership.” It is difficult to claim who is right or wrong. The dispute of copyright is a complex issue. Personally, it is just an inspiration from the original film which the unknown artist makes use of it and combined with new elements. Therefore, it may irrelevant to the copyright issue. On the other hand, it can be a promotion to the original film from the popularity of the website.

“Clearly, http://mouchette.org provokes heated reaction to
portray of child sexuality and to the way it constructs and
manipulates the identity online.”

Could such a well-developed Web-site really be the work a 13-year-old girl? Who is the real Mouchette? The true identity of the artist behind http://mouchette.org remains unknown. It raises our concern of the masking of personal identity on the Internet. Also, the ability of the creator to maintain the anonymity for over twenty years is one of the significant reasons this website has gained its “international reputation” in the Internet art community.

There concerns stem from the anxieties surrounding cases of pedophilia and other sexual fetishes. No matter the “7 songs” and “Flesh and Blood” are sexually suggestive. However, it can be seen as a trap to pedophilia. Also, it challenges the convention that a youth girl engaged in the initiation of sex. I don’t like the presentation of the child sexuality. Even though I know it may be fake and just a gimmick in the website. A youth girl should not be so sexually mature and sexual arousing which I am doubt about the intention and implication of the artist.